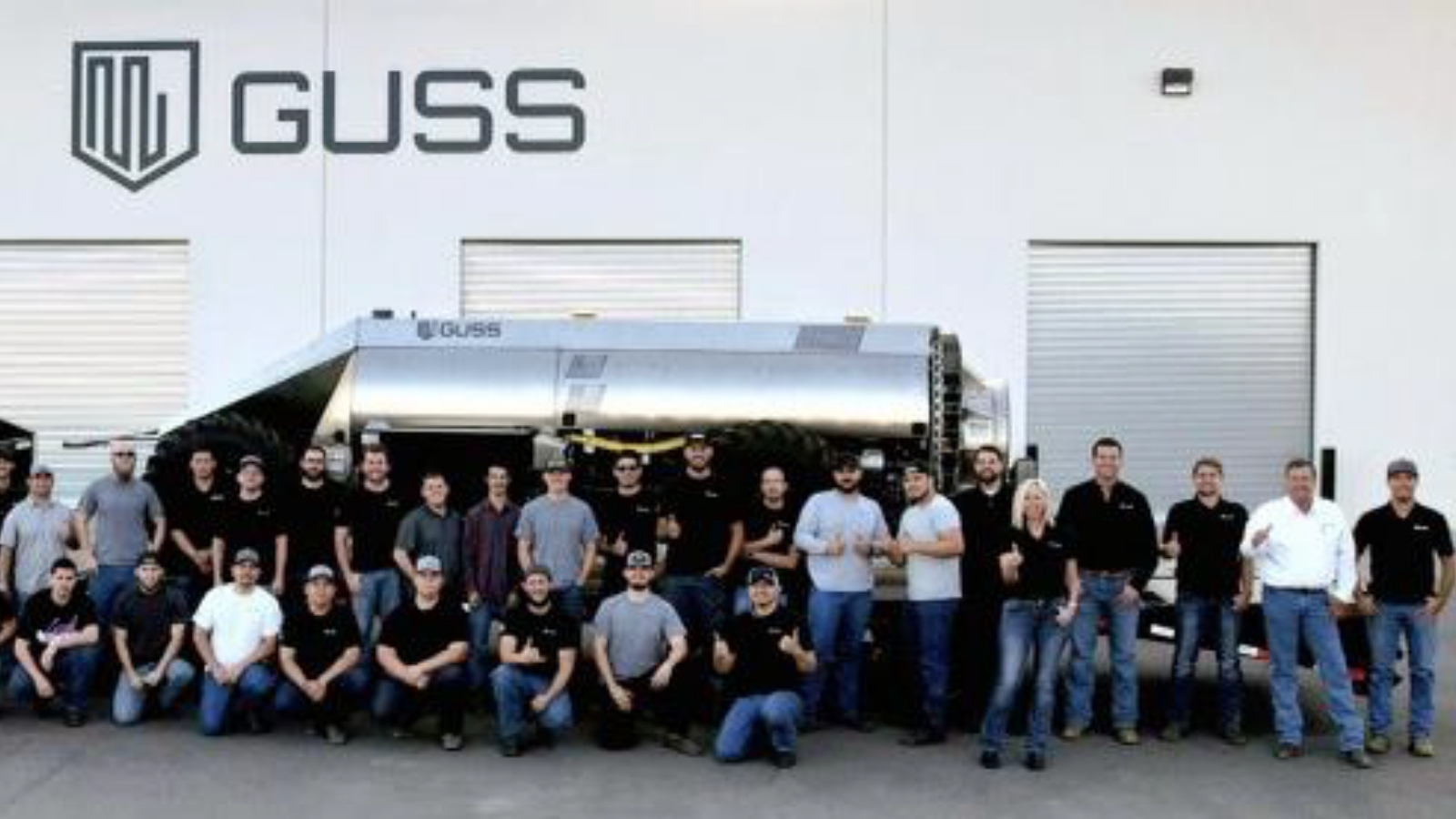 KINGSBURG, CA, September 1, 2021 – Autonomous agriculture equipment is gaining momentum and GUSS Automation has hit their stride. In just a year and a half, they have delivered their 100th autonomous orchard sprayer and now have GUSS machines spraying throughout the United States and in Australia.

The growth of GUSS has been an exciting journey for Crinklaw Farm Services owner, Dave Crinklaw and his team. GUSS (Global Unmanned Spray System) was developed out of necessity. Crinklaw dealt with the shortage of labor in his commercial application business and found himself looking for answers and the solution came in the form of a driverless orchard sprayer.

This progressive idea would take a team to make it materialize. Research and development began at Crinklaw Farm Services in Kingsburg, California in 2014 to develop the first GUSS prototype. After three and a half years, their commitment to developing the first autonomous orchard sprayer paid off. Crinklaw Farm Services built 10 autonomous sprayers and put the GUSS fleet to work for their orchard spraying business in 2018. They were able to spray more acres with increased precision and efficiency with less labor. The single operator could now monitor up to eight GUSS machines from the vehicle while the nurse trucks supplied the spray material when GUSS signaled for a refill. It wasn’t long before growers took notice of how GUSS would change their business as well and wanted GUSS in their orchards.

Crinklaw and his team began manufacturing more machines and the GUSS team was ecstatic to debut their autonomous orchard sprayer at the 2018 World Ag Expo in Tulare, California. GUSS drove through the show orchard showing all spectators how it uses a combination of GPS, LiDAR and the latest technology to maneuver through the orchard with ease. Growers were amazed by this innovative machine and the buzz throughout the agriculture industry spread.

With this success and more machines in production, GUSS Automation, LLC was born and with the need for a larger facility to meet increasing demand, the team relocated to their new building in July 2019 with just nine employees. The revolutionary Orchard GUSS was delivered to the first outside customer, Blair Ground Services in December of 2019.

“We absolutely love the machines. We do at least 40-50 acres more per day with a crew of four versus the traditional manpower-driven tractor. The best things are efficiency, safety and precision.” said Ryan Boucher, co-owner of Blair Ground Services. “A lot of things made us opt for the machines, like efficiency. And labor costs are going sky high, so that was a big factor. There’s less liability and more dependability.”

GUSS Automation, LLC continues to grow and currently has 35 employees which includes a tech team, engineers, field testers, customer success team, and their fabrication and assembly crews. With the rising demand for GUSS, they are streamlining the manufacturing process to double production to two GUSS machines per week. GUSS Automation has also built their outside team of trusted authorized GUSS dealers in the US and Australia to meet customer needs.

GUSS Automation continues to be an industry innovator. As the need for autonomous agriculture equipment continues to increase, GUSS Automation is finding new ways and developing new machines to meet those needs. Their most current development is in final testing and will be unveiled this fall. Those that have gotten a sneak peek at the new machine are eager to put it to work to see how it will improve their farming businesses.