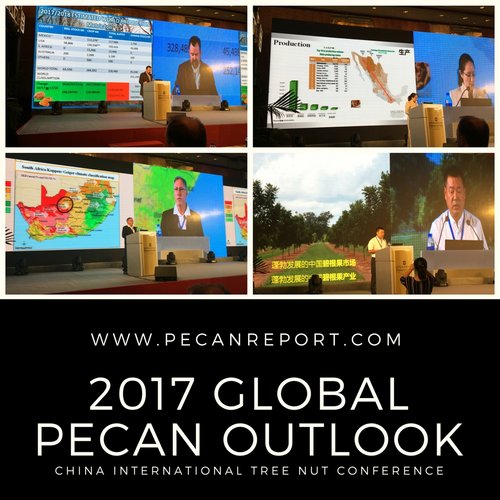 The 2017 China International Tree Nut Conference is being held in Guangzhou China. The event started on Wednesday August 2nd and will conclude Friday August 4th.  The event is designed to facilitate education and trade in the nut industry around the globe. The major nuts being represented at the event include almonds, pistachio, walnut, macadamia, hazelnut, cashew and of course pecans. Pecans were well represented at today’s events beginning with Mr. Kevin Ivey, President of the US Pecan Growers Council, giving a thorough report on the current world demand of pecans and how the US is responding to fill the increasing demand through increased plantings as well as improved management practices.

US Pecans was followed by Mexico who gave an update on their increasing production as well as several recent successful trade missions.

Finally, the pecan update was concluded by Mr. Liu Guangqin, researcher and professor of Jiangsu Academy of Agricultural Sciences. Mr. Liu updated about the current challenges and opportunities for pecan growers in China. Like other countries China too is increasing production, however many growers are still in a learning curve and many of the growers are struggling to adopt best practices in the management of orchards. However, some growers have adopted a method of pruning that is cutting time to production from an average of 8-10 years down to 5-6 years, and are now trying to get more growers to adopt these methods. Mr. Liu concluded the pecan update by complementing the US Pecan Growers Council and its leadership in the world market saying that “it is an example to be followed” for collaboration in the industry.